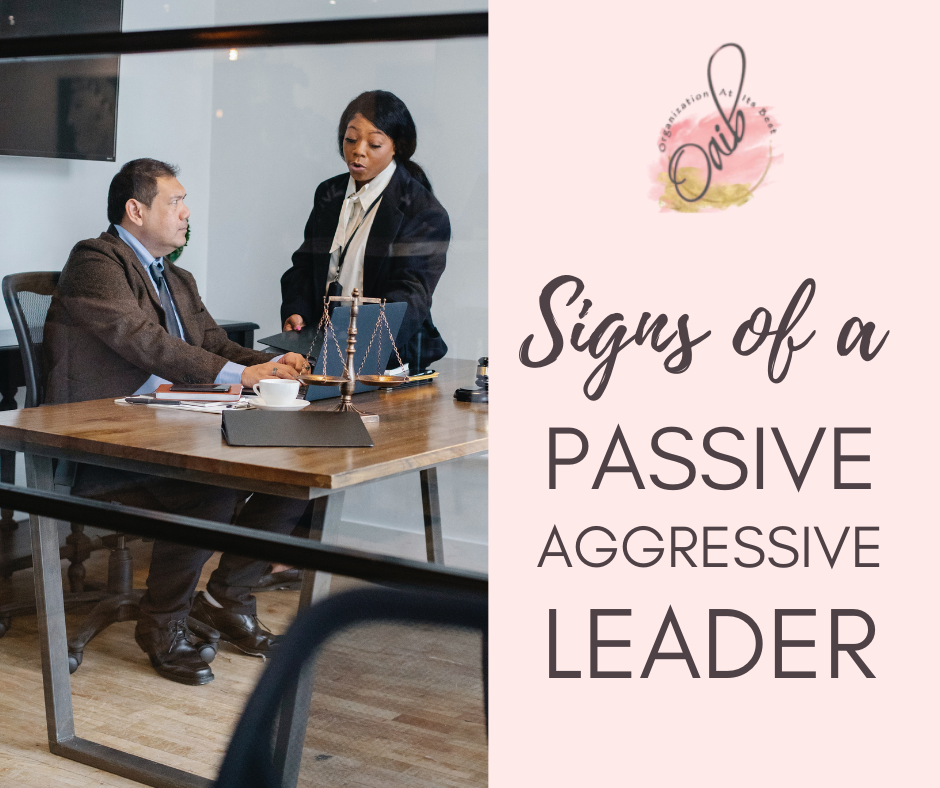 Signs of a Passive-Aggressive Leader

Passive-aggressive leaders, especially those who seek to maintain complete control over their work environment, can cause a lot of harm and create toxic cultures. It’s difficult to know where you stand with them.

According to the Oxford English Dictionary, passive-aggressive behavior is “characterized by indirect resistance to the demands of others and an avoidance of direct confrontation, as in procrastinating, pouting, or misplacing important materials.”

Here are a few things to help you spot a passive aggressive leader.

They may seem nice on the surface. Because passive-aggressive leaders often have inner insecurities driving their self-serving behavior (such as a fear of being “found out”), they are often skilled at making people like them. Some show up as a “good person” who is always willing to help and encourage others, but then subtly undermines those same people in unseen, crafty, or devious ways.

Passive-aggressive leaders usually avoid head-on confrontations and instead focus on speaking their desires in a covert way. For example, if they’re unhappy with your performance or a decision, they won’t tell you directly. They may not say anything to you at all, going so far as to lie and say that you’re doing great, or that they are unaware of any mistakes on your part. A “confrontation” would make them too uncomfortable. Instead, their manipulation takes place in hints, snide remarks, or open-ended comments left open to interpretation.

This same person may then turn around and complain to other people about how dissatisfied they are with you, all the while being nice and engaging with you. If they do give you feedback, they may wait until your performance evaluation and put the “mistake” or the incident that they previously downplayed on your permanent record — with no warning or heads up that they’re displeased or that they wanted you to change your behavior.

Because this type of behavior affects people around them, you can also look at a leader’s environment to determine if they are passive-aggressive. People who work closely with passive-aggressive leaders may adopt similar or overly-pleasing behaviors. Some are affected to the point where they think that they can’t be labeled with anything negative. Their cultures and teams are filled with people who distrust one another, assume the worst, withhold information, and don’t feel safe bringing their authentic selves to work.