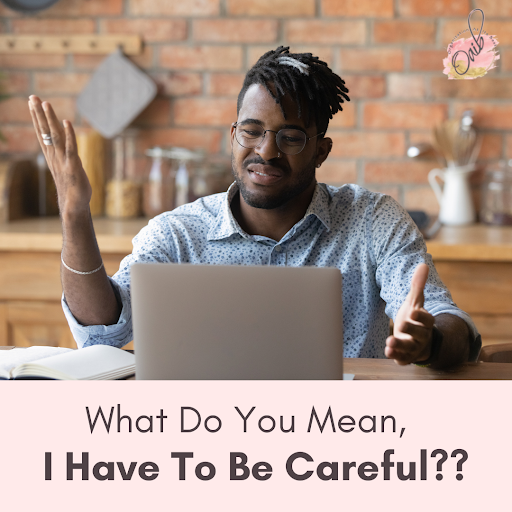 What Do You Mean I Have To Be Careful?

The other day, I talked to a White male colleague who said, “Tawana, you need to be careful about how you come across.”

Yep. I was triggered.

Throughout my career, both Black and White people have cautioned me to “be careful” with what I say or how I act. Usually, it’s coming from a good place, as in this case. My colleague wanted to help me, but his words felt like he was “telling” me to shrink, play small, don’t rock the boat.

Here’s the thing…I’m not trying to be palatable or assimilate. I’m striving to evoke change.

Telling Others How To Be

While I was triggered, I didn’t react. I responded the way I chose to.

I took it as an opportunity to educate my colleague, saying, “Do you realize your colonial mindset, make you think it’s OK to tell me how I have to be to be acceptable?”

Growing up in a culture built on White supremacy (not White Supremacists) taught him that I’m the one who has to change to fit in with him and his culture.

“When you tell me I have to be careful, a switch goes off,” I explained to him. “And now I have to navigate the power and cultural dynamics of our relationship.”

Because we have an open relationship, we got into it.

He responded, “I have to admit that it’s frustrating that I have to be careful with what I say in today’s hypersensitive culture. White men have to navigate conversations, too.”

I nodded, listening to him as a person.

“Okay, I said, “but the difference is safety. When a White person tells a Black person to be careful, it’s putting us in our place. I don’t ‘have to’ do anything.”

If This Happens To You

If you’re a Person of Color who has been triggered, you will get more from your relationships if you respond rather than react.

Try to think about the offender’s background and what their intent was.

I’m friends with this man. He’s not out to hurt me and I know that. We grew up playing on two different playgrounds. I told him about the impact of his words, in a way he could understand, learn from, and now be accountable.

If You’re In A Position Of Power

If you’re the one with power, or are part of the dominant culture, please be aware of the impact of your words.

Instead of saying, “you have to be careful,” you could begin by acknowledging your Black colleague is on the same level with you and say something like: “ Can I tell you how I think that might land / how that sounds to me?” This will be better received than telling them how they “have to” be.