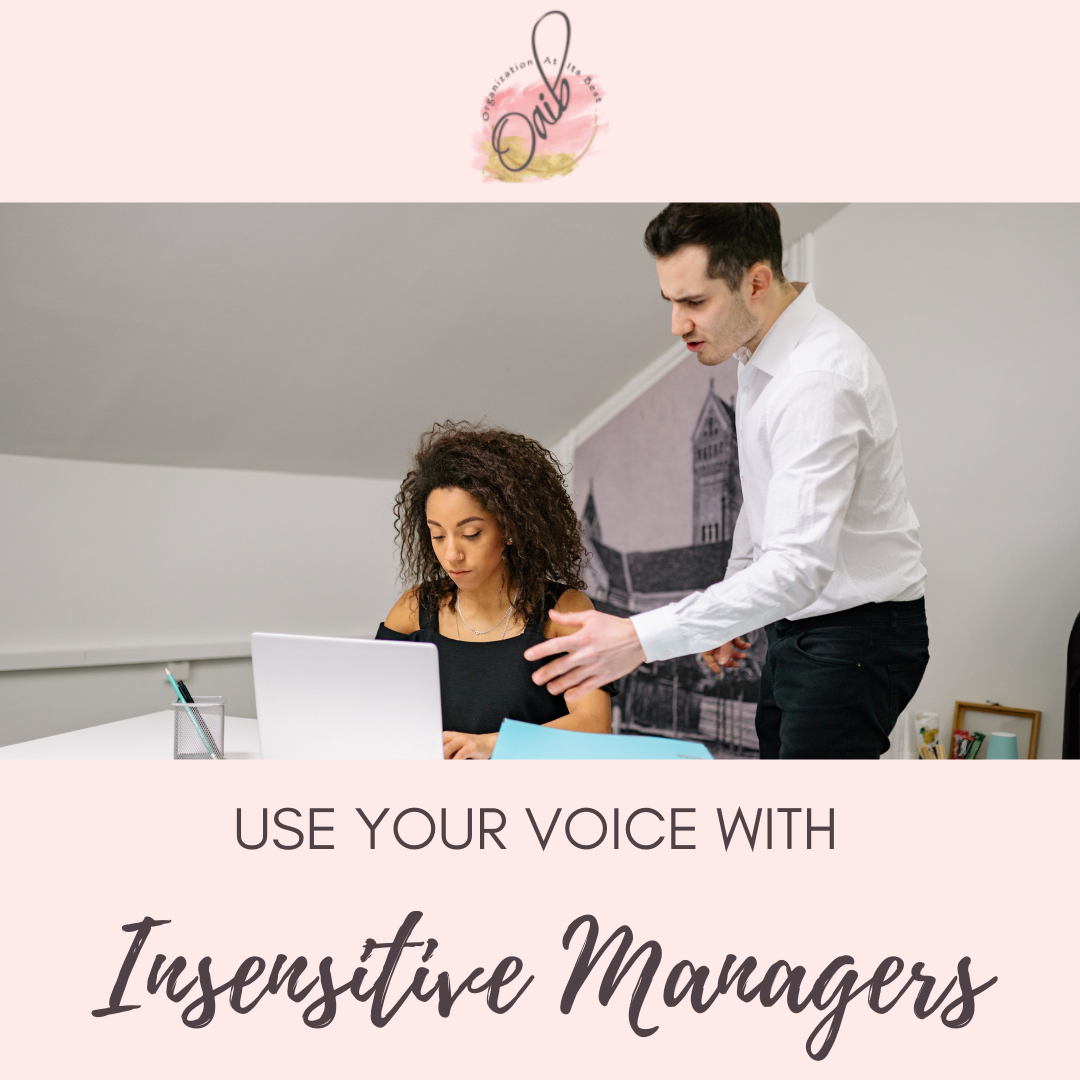 Use Your Voice With Insensitive Managers

When a manager says something offensive or insensitive, before reacting, we should take a step back and assess if his/her behavior is intentional, or they are being racist, biased, or simply unaware of their word choice and impact on other people.

There’s a sensitivity in the air these days, which can lead us to shut down around difficult people and automatically label them as racist. I have even seen people blame their organizations for “allowing” racism to exist when there are so many other dynamics at play, like lack of training.

Let’s be super clear. I’m not giving biased or insensitive people a free pass. Nor am I excusing organizations for not properly training their managers (who many times have never been given real feedback or been held accountable.)

If someone acts out of biases (conscious or unconscious) it’s their responsibility to look at themselves in the mirror and make some changes, but if they don’t, and your organization won’t, you should.

Even though it’s exhausting, and often “not my job,” I am here to tell you that when we do confront bad behavior, it almost always gets better.

Moreover, when you use your voice, you strengthen your own personal power.

Your power comes from your self-respect.

When you set boundaries, others will see that self-respect, and change accordingly.

But you can also give away this power.

If you label someone a racist, yell at them, or shut down and avoid the issue, they won’t see that self-respect.

On the other hand, if you use your voice effectively, you may just shock them awake.

One thing you can do to demonstrate your self-respect is to confront an insensitive manager with some direct questions.

Let’s say your manager bulldozes you in a meeting and leaves you feeling small.

It’s in your power to go to that person and say, “I noticed that your voice got louder and your tone was aggressive after a statement I made. I assumed you were directing that at me, and I wanted to clarify if that was true or not.

Then just listen to what they have to say.

You could say, “I’ve experienced you responding the same way in other meetings and it’s usually when you’re not happy or don’t agree with something. I took your tone to mean you didn’t like what you heard.”

Continue to listen to what they have to say.

After hearing their point of view, you can clearly and directly say, “I don’t know if you’re aware but when you speak to me like that, it’s offensive. It feels like we have an adult/child relationship rather than two adults communicating. Going forward, I would like you to address me like an adult colleague.”

This straightforward communication does two things. First, it calls out and isolates the demeaning behavior. Second, it sets clear boundaries on how you expect to be treated.

And you did that. Not HR. Not your boss. No one else. It was you.

Once you’ve set boundaries, it’s up to the other person how to respond.

Maybe they’re dealing with something at home and will apologize. Maybe calling out their demoralizing conduct will bring the awareness needed for them to change. Or, on the other hand, maybe they spoke to you that way because they really don’t see you as their equal.

Either way, communicating this way puts you in a place of power rather than a victim. And let me tell you, whether they change or not, that feels GOOD!

If you or your organization’s managers would like to discuss leadership training, let me know. I’d love to talk.